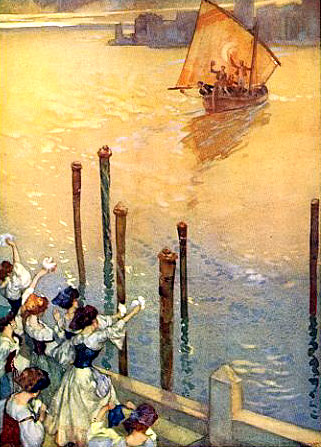 The story of The Gondoliers

Marco and Guiseppe are two handsome brothers who are young Gondoliers in Venice, much loved by the women (the Contadine).

Since all the Contadine want to marry them, they decide to have a random choice blind man’s buff game and catch Gianetta and Tessa (by peeking). They are very quickly married.

The Duke and Duchess arrive with their daughter Casilda, telling Casilda that she was married as a baby to the forthcoming King of Barataria, who is either Marco or Giuseppe. Casilda is actually in love with Luiz who is their attendant.

Don Alhambra arrives to tell the brothers that one of them is an unintentional bigamist, because one of them was adopted and is actually to be crowned the next King of Barataria. Since no one knows which it is, the brothers set out to Barataria to rule jointly until their old nurse can be found to say which is which.

In Act 2, they miss their wives and remodel the court by republican principles, where everyone is more or less equal.

Their wives arrive and they celebrate by dancing the lively Cachucha.

When Inez, their old nursemaid arrives, she reveals that she switched the babies and that the king is actually Luiz, and all ends happily.